EMPOWERING THE DRIVER THROUGH A HISTORY OF BREAKTHROUGHS

With every push of the start button, Mazda engineers want the cars they’ve designed to feel as if they’ve come to life. For them, it’s not about the numeric output of the engine. It is about the way the car feels.

With the all-new Mazda3, Mazda’s designers and engineers evaluated nearly every aspect of the car, leading to engineering breakthroughs that enhance the way the car feels.

“Since its early days as a Mazda Protégé and Mazda 323, Mazda3 has a unique history of breakthroughs by overcoming engineering and technological challenges that set the car apart from the rest,” said Kota Beppu, the program manager of the all-new Mazda3.

FOCUSING ON WHAT YOU HEAR AND HOW YOU HEAR IT

From the moment passengers sit down in Mazda3 and shut the door, they experience a sense of tranquility, which separates them from the outside world.

When the engineers at Mazda examined how sound affected those in the cabin, they focused on the three sound characteristics that humans react to: “volume of sound,” “changes in pitch and tone over time,” and “the direction from which the sound originates.” Mazda has put great effort into measures for controlling sounds that penetrate the interior. The goal is to eliminate sound that occupants might find unpleasant, due to the way it fluctuates or to the direction from which it reaches the ear. Suppressing noise generation and reducing its volume, while at the same time controlling the fluctuations in and direction of sounds leads to a “quality of quietness” in the cabin that should satisfy all occupants.

One way they achieved a “quality of quietness” in the cabin of Mazda3 was to use two-wall construction of the floor carpet and body panel. Conventional thinking dictates that to better insulate a car from the outside noise, you must add to the mass of the insulation. Borrowing from architecture, Mazda’s engineers developed a design that treats the floor mats and body panel as two walls, leading to an increase in efficiency while maintaining the same mass. 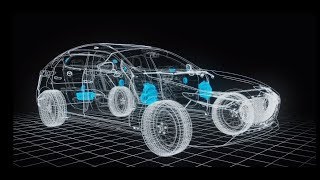 DESIGNING AN AUDIO SYSTEM BASED ON HUMAN AND CABIN CHARACTERISTICS

Understanding how humans perceive sound directly impacted speaker placement around the cabin of the all-new Mazda3. Mazda engineers conducted a series of new studies to illustrate how sounds are transmitted through the vehicles’ cabin. This led the engineers to move the location of the subwoofers to the corners to improve bass amplification and dissipation.

“Simply stating that Mazda mounted the woofers in the cowl side panels might leave people to think it was a minor change,” said Koji Wakamatsu, a member of the Electric and Electronics Performance department. “That could not be further from the truth. In fact, it represents an engineering breakthrough that improves the quality of both audio reproduction and sound insulation.”

Mazda engineers also studied how the quality of sound in the mid to high frequencies can be impacted by reflected sounds in the cabin. Based on what they learned, speakers were positioned and angled in a way to reduce the impact from reflected sounds.

ALL-WHEEL DRIVE IN HARMONY WITH G-VECTORING CONTROL PLUS

Mazda’s predictive i-Activ all-wheel drive (AWD) is now available in the all-new Mazda3. The i-Activ AWD, on any given situation, provides a refined and stable ride, inspiring confidence in any driver.

In addition to always being ready to handle rain, snow or any other slippery conditions, i-Activ AWD helps preserve an extra amount of solid grip at all times, which contributes to smoother accelerating, breaking or cornering on dry roads. The balance of grip between the front and rear tires are continuously controlled to help maintain a smooth, stable motion of AWD driving at all times. Furthermore, Mazda’s evolved i-Activ AWD works in harmony with G-Vectoring Control (GVC) to control torque distribution between the front and rear wheels in accordance with the data from the driver’s steering and acceleration input and in conjunction with data from each wheel.

“It’s a really a harmonious interaction of all the different parts of the car to make it behave naturally,” explained Dave Coleman, development engineer at Mazda’s Research and Development Center. “It’s an evolution of the same process we’ve been going over the last 25 or 30 years, trying to make the car behave as naturally as possible.”